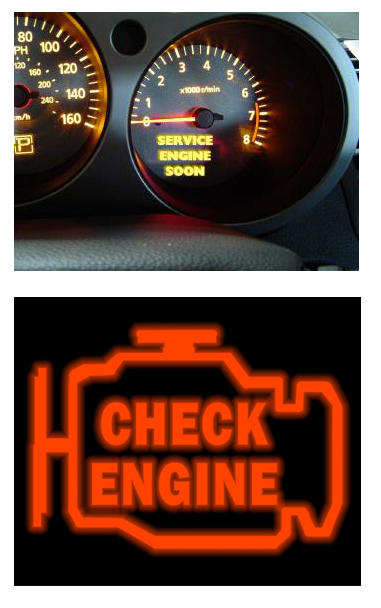 You’re driving along in your car or truck and suddenly a red light illuminates on your dash telling you to check or service your engine. As drivers, we are trained to respond to orders of this sort. When a light flashes “Low fuel,” we hurry to a gas station. When the tiny oil indicator comes on, we add oil. But “check engine”? Unfortunately, this indicator light is one of the most misunderstood indicators on your vehicle’s dashboard. But by ignoring this indicator, there are many dangers and potential financial risks, and it is vital to address.
After the fear and panic of the light’s first flash, the driver who doesn’t rush to a service center usually notices as the days pass that nothing at all seems to be wrong. However, by continuing to drive with the light indicator on, you may be exacerbating problems by driving with an issue. The light may mean many things. One frequent problem, for example, is that the emissions system is off kilter, and the car is polluting the air; another is that the gasoline cap is loose, causing the car’s computer to detect an unusual pressure level in the tank (tighten it and the light will eventually go off). But the glitches that activate the check-engine light are often nothing a driver would readily notice. As a result, the country is full of people driving around with check-engine lights aglow – often while trying to figure out how to shut them off.
If you continue to drive your vehicle with the check engine light on, you may experience a difficulty starting your car, a loss of power, and lost fuel economy. There is a reason why the manufacturer installed the check engine light and it is in your best interest to pay attention to what it’s telling you. As a general rule it is less expensive to have the check engine light code repairs when it first comes on.
If you choose to continue ignoring the service light, repairs can become costly and potentially create a cascade effect of issues. The most common check engine light is the old “forgot to tighten the gas cap” signal. Either you did not replace the cap after filling the tank, or you did not properly reseal the pressurized fuel system.
In late-model cars, a blinking light usually indicates an engine misfire so severe that unburned fuel is being dumped into the exhaust system, where it can quickly damage the catalytic converter, requiring an expensive repair. If that happens, you should reduce power and have the car or truck looked at as soon as possible.
According to a Consumer Reports study in 2009, “The customer is really, in the long run, potentially hurting their pocket book by leaving that light on and ignoring it,” says Jim Collins, a national training team leader for Ford Motor Company. In some extreme cases, the car’s computer may reduce power for you, as it tries to limit the risk of damage.
The check-engine light, formally known as a malfunction indicator lamp, is an indication of a failure somewhere, and the problem is often emissions related.
If you find yourself with a check engine light blinking your options are to get it looked at Right away, before you end up doing more damage. If you don’t have a shop you normally rely on for this type of work you might want to locate a Cottman Total Auto Car and transmission near you. Cottman can perform a FREE TransCheck 21 Plus(R) with a FREE computer scan. The TransCheck 21 includes checking the level and condition of the transmission fluid, road testing your car, and a diagnosis of the external transmission controls.  This free scan will give you the info needed to fix your car and stop that annoying blinking light.  Locate a Cottman Center near you.