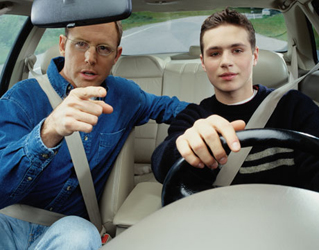 Dozens of  teenagers receive a free lesson in defensive driving  thanks to this non-profit organization that travels from state to state as part of an effort to make the roads safer. Be Responsible And Keep Everyone Safe
B.R.A.K.E.S training is offered free of charge. The non-profit is supported by donations.
Teens must be at least 15 year old and have a permit to participate, and parents are required to accompany them.
“I love it. I think it should be a requirement for all teenage children,” said a parent.
The program was started by former national Hot rod Association racer Doug Herbert, who lost two teenage sons in a car accident.
“If we try and push them hard enough where they actually lose control of the car, we teach them that there is an edge there and that you need to stay on the safe side of that edge,” Herbert said.
“You can’t learn this stuff from a chalk board or from a book. You have to experience it firsthand. That’s what our driving instructors are trying to do, to put the kids in an uncomfortable situation, build their confidence in the vehicle’s limitations and also give them an understanding of what they should or shouldn’t do and to save themselves,” described Matt Reilly, a driving instructor.
Nationwide, about 6,000 teenagers are killed in traffic accidents every year.
On one course, instructors use various methods to distract the young drivers to teach them the importance of keeping their focus on the road.
Statistics show that people talking on cell phones are four times more likely to get in an accident, and if you’re texting, you’re eight times more likely to crash.
Spinning out on a slick road and sudden stops within a short distance are just a few examples of why defensive driving skills are necessary.
In the safe environment of the track, teenage drivers learn how to handle the hazards they’ll face on the streets.
Teens are paired with professional drivers in rental cars for a three-hour training program.