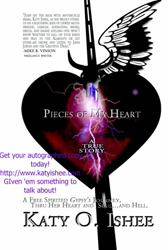 Talk about touching a nerve. This is a book that men and women will pass around to each other with a brief handwritten note tucked inside the cover, “You have to read this!”
Sometimes you have to leave your life behind for awhile to see it and really live it freshly again. Sometimes heart breaking, sometimes humorous, always brutally honest and hardcore.
This memoir presents a powerful and unsettling series of memories that work simultaneity on a number of levels controlled by someone we all trust; Mother.
Katy recalls her rebellious ways and crazy times of being a renegade biker chick. From insane asylums, she tells stories of unspeakable horror, ECT (electroshock, shock treatment, shock therapy. The most common side effects of ECT are memory loss and cognitive damage.) that have long been shrouded in secrecy until now. Her quest to refusing to give up looking for a son would linger in her memory like a treasured photograph in this gut-wrenching story. Katy braids together past, present and the events of one desperate day in a haunting true story in which the sins of the past threaten to destroy a wicked red-blooded original; Mother’s fragile equilibrium of present.
A raw series of secrets of an “unwed” mother and/or loose teenager as Katy’s mother paints her life canvas. From the secrecy of closed adoption and maternity homes she was warned not to reveal her sur-name, during an era when shame upon the family name was unbearable.
Her portrayal of her family and the ties that bind is sensitive, full of hate and betrayal, lost hopes and burning questions, freedom and bondage and love and laughter.
Her journey takes you from coast to coast and back again. There are plenty of laughs and hardcore knocks along the way and within a biker’s community.
She inavertly challenges herself to sail like a hawk as she reaches for freedom from the “Seen or Be Seen” diverse crowd to never giving in to the “principal” of searching for her beloved son.
Will she eventually find Michael Adams S., her son?  If you haven’t ordered this book yet, what are you waiting for? This is a MUST READ! It made my eyes weld up and pulled my hamstrings. I found myself rereading it a week later.  I haven’t read a biker book that rocks this good in a long time! To learn more or to order visit here