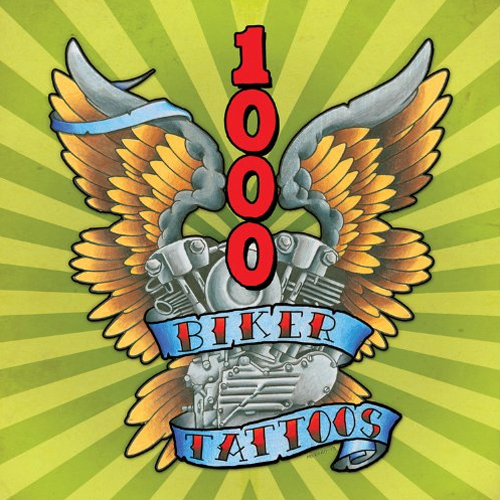 Anyone who rides a motorcycle lives, to some degree, in the margins of society. Where members of the herd drive Toyota Camrys and hipster  hatchbacks, bikers opt for Harley-Davidsons, Triumphs, and Ducatis, putting themselves out there like raised middle fingers thrust at the ordinary citizens of the world. And just as motorcyclist’s ride is an affront to the sensibilities of the meek and the conventional, so too is the ink on his or her skin. Tattoos have long been an integral part of this culture, the result of the overwhelming number of ex-military men who formed the nucleus of the postwar outlaw motorcycle club scene. These soldiers, sailors, and marines returned from war with statements etched in ink upon their bodies, and they continued that tradition when they formed the clubs that came to
define motorcycle culture. In 1000 Biker Tattoos, motorcycle photographer Sara Liberte celebrates this most personal of art forms by capturing the wild abandon of the motorcycle lifestyle as expressed through tattoo work. Featuring 1,000 photos of tattoos and the artwork used to create them, along with profiles of the most renowned tattoo artists in the biker community, this book provides an unprecedented window into the most intimate aspect of motorcycle culture.

Order a copy copy today visit Ebay Sara and Chad will even sign it for ya!