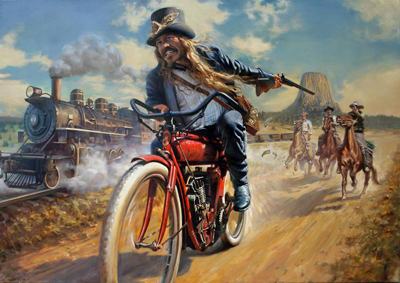 In 2005, David Uhl became the first artist to commemorate the Sturgis Rally each year with a special painting, adding a little twist.  Canvas prints were only available at a reduced price for those who ordered before the end of the rally (Stranger in Town, A Fool’s Gold, Made in America, An August to Remember, Whiskey Business, 70 & Counting and Sly Hill Showdown).
David’s brainstorm created quite a stir within the motorcycle community, as the value of these highly collectable pieces climbed each year because of their instant scarcity.
This year, David had five different images in mind and, based on the feedback offered by his collectors, selected “The Ironhorse Heist”.  This masterpiece features Kevin Bean’re (more on him to follow) and, for the first time ever, will be offered in both horizontal and vertical formats.
“The Iron horse Heist”
In David’s words, “I saw The Bean’re before I actually was introduced to him, and I remember thinking “WOW what a GREAT face for a painting someday!”
“Bean’re told me last year he was writing a book about his extensive travels and experiences around the world. I started dreaming up a concept that might reflect some of the novel situations that only the Bean could find himself in.  I definitely wanted to portray this gypsy nomad from another time with some high drama and action.  His signature top hat with the gaping Rattler head slung my timeline back a hundred years, and then it hit me.  The old West, with the long tail coat gambler attire was perfect.  An epic train robbery fit the bill, being chased by a posse with guns a blazin’. I then figured this would be a fine addition to my Sturgis collection as well as the whimsical book cover I was looking for.  I am proud to present my 2012 Sturgis release ” The Iron Horse Heist”.  His book “Bean’re….Motorcycle Nomad” featuring my cover art will also be released in time for the rally this year.”
These images will be available as hand-signed, numbered canvas giclee prints.  Beautifully framed, each comes with a Certificate of Authenticity.  Matching numbers are available for those wanting both versions and/or to match your  existing David Uhl Sturgis Commemorative pieces from past years.  Edition numbers will be assigned as orders are taken, so you are encouraged to act quickly!  visit uhlstudios.com