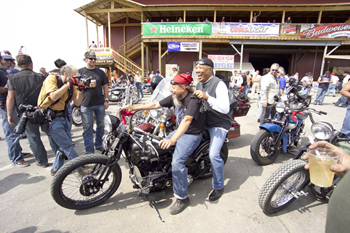 The Broken Spoke Saloon today announced that the Michael Lichter and Sugar Bear Ride’ 2010 will take place on Sunday, August 8 at 11:00 a.m.  The Broken Spoke Campground is located on Highway 79 North, just past Bear Butte State Park in Sturgis, South Dakota.
The Broken Spoke Saloon is bringing back the Michael Lichter and Sugar Bear Ride after a very successful 2009 event. The Sunday, August 8 event will be a fantastic day of activities that celebrate motorcycles and two innovators who have made such a lasting impact.
The event will begin at the Broken Spoke Campground with a Kick-off Pool Party featuring Jay Allen’s outrageous contests. The bikes will depart and head to the majestic route 212. All along the way, Michael will be shooting for an upcoming feature with Easyriders Magazine. The ride will proceed to a special location found by Jay, treating you to a cool beverage. Then, you head over to the Sturgis Raceway, where you will be able to go one on one with some of the top motorcycle builders. Do you have the need for speed? Do you think you have the fastest ride out there? Then you need to take part in this ride!
The day will conclude back at the Broken Spoke Campground for you to be able to partake in the IMBBA Bike Show.